Kendrick B. Meek is the Senior Consulting Advisor for Closs Global Solutions. He also currently serves as a senior advisor to a diverse group of companies in the healthcare, homeland security, agriculture, and financial services sectors, drawing upon strategic skills developed over a long tenure in politics, including his time in the U.S. House of Representatives, Florida State Legislature, and as Special Representative to the United Nations. 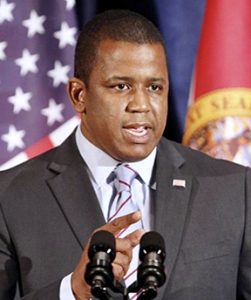 From 2002 to 2010, Mr. Meek represented the 17th Congressional District of Florida. During his time in Washington, Congressman Meek’s open-minded and bipartisan outlook allowed him to navigate a broad cross-section of Congress in order to achieve results for his constituents. Building on a strong legislative record in the Florida Senate and Florida House of Representatives, Congressman Meek was able to secure a spot on the House Ways and Means Committee. In that capacity, he was successful in sponsoring and passing legislation focused on tax, trade and healthcare issues.

While in Congress, Mr. Meek devoted significant energy to engaging younger Americans in the political process by pushing for fresh ideas in Washington. He was the youngest Member of Congress to serve as Chairperson of the Congressional Black Caucus Foundation.

Mr. Meek is also deeply steeped in matters related to homeland security and international affairs.  In 2011, President Obama appointed him as Special Representative to the United Nations. While in Congress, he was appointed to the NATO Parliamentary Assembly and served on both the House Armed Services and Homeland Security Committees. In those roles, he traveled extensively throughout Europe, Africa and the Middle East, engaging with foreign leaders on international security and trade matters.